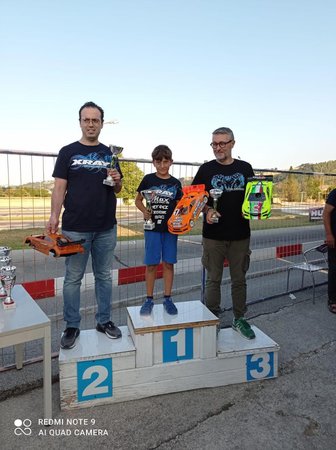 We had the final race of summer season season in Montegiorgio on roadtrack.

Drivers loved the day with good climate and a few group drivers used the race to arrange the vital Manufacture GT in Fiorano.

In GT class Luca De Santis with GTXE in bettering efficiency each race getting increasingly confidence. He gained the race, with Federico Tassi 2nd and Francesco Tomassetti third

In 1:10 nitro class we’ve got Francesco Domanin TQ and win the ultimate with one other XRAY driver 2nd Andrea Porfiri. third place for Ronny Compagnucci

1:8 +50 was essentially the most excited ultimate with couple of drivers who didn’t race since many a few years! Alberto Gagliardi gained the 2 10 minutes ultimate with Emilio Antico 2nd and Alberto D’angelo third.

The 1:8 class was the primary ultimate with quicker drivers and the closest battle.

Domanin begin from TQ with Dante Piersante 2nd. Firstly two essential battles with Filippo and Dante who combat with many overtaking, following by Pierantoni and Saccente additionally in shut tempo for the rostrum! After the half-hour ultimate Dante was 1st underneath the checkered flag, Filippo 2nd and Alessandro saccente third.